Commercial recordings began with Edison’s phonograph, which recorded sound on a rotating cylinder, initially covered in thin foil but by the early twentieth century made of wax or shellac. Edison thought the primary value of his invention would be in recording: businessmen could use it to record their instructions; people could record their wills.

He wrote in the North American Review,  June 1878 that recording would aid in: 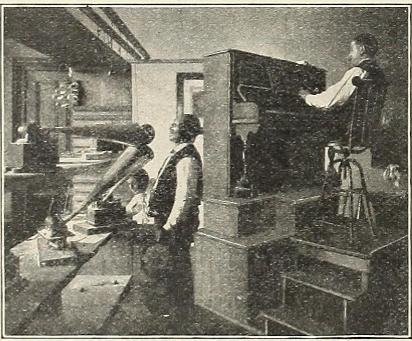 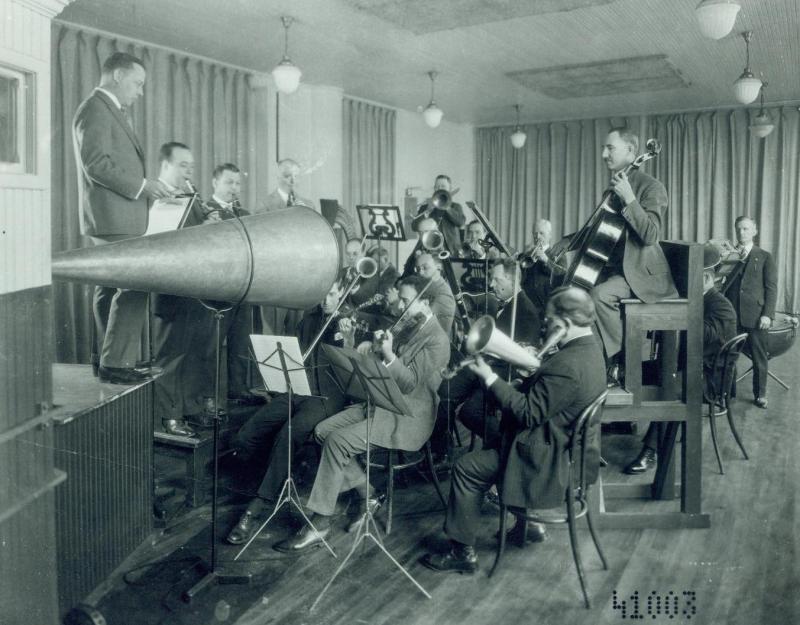 It turned out the value of recording lay primarily in music sales.

By 1910 there were two formats for recorded music: Edison’s cylinders and the flat 78 r.p.m. disks invented by Emile Berliner. The flat platter format eventually won out, partly because it was easier to mass produce, although Edison cylinders continued into the 1920s.

Before the 1920s, and the invention of electrical amplification, musicians recorded by gathering in front of a large funnel to play. The sound of their instruments traveled into the funnel, down a tube, and onto a thin diaphragm attached to a sharp stylus. The vibrations of the stylus cut grooves in a rotating wax platter or cylinder, which could then be used to make multiple copies.

In the “acoustic recording era” the recorder producer had to arrange the musicians so the featured instruments were closest to the funnel, and the less important--or louder--instruments were at the back. In some cases a soloist might sit on a wheeled chair, and when it came time for the solo an assistant would wheel the performer closer to the funnel.  Any "mixing" depended on the physical placement of the players.

The Vaudeville singer Morton Harvey described the process this way to an audience in Topeka, Kansas in 1915:

"The stringed instruments were grouped on the floor of the room, the horns often placed behind, arranged on sliding platforms to enable the players to vary the distance between the reproducing horn and that of the musician. Other instruments are given positions on elevated stands, every feature being studiously planned to create harmony and the desired results. "It's difficult, sometimes, to determine just how one is singing," said Mr. Harvey, "when a horn booms up behind or a bird whistle in one's ear almost splits the timpanum. "No," said he, "not every master record is a success; often several blanks are used before a successful reproduction is made."

By the mid 1920s, electrical amplification and microphones had made it possible to dramatically improve recording quality. Here are excerpts from two recordings of the Nile duet (from Aida) with Giovanni Martinelli from 1924, then the 1926 remake, recorded with electrical equipment. Not only is there less mechanical noise, but the singer's low and high end is much more apparent.