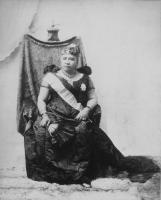 Native Hawaiian music was strongly affected by the arrival of Europeans and Americans in the 19th century. Missionaries introduced Christian hymns, and by the late nineteenth century, Hawaiians could hear popular music from other countries in ports and cities that handled the growing trade. In the 1890s US-owned businesses seized control of the government of Hawaii and shortly thereafter the island became a colonial possession of the United States.

They’re Wearing Them Higher in Hawaii

Under a Texas Moon

By that point, Hawaiian musicians had developed a very distinctive style which would be extremely important to popular music worldwide. Hawaiian musicians touring the US and elsewhere often featured the Ukulele, a small four string guitar-like instrument. Ukuleles were extremely popular in the early twentieth century: recordings frequently mention the Ukulele as a sign of both exotic Hawaiian authenticity and ragtime modernity as in "Ragging the Songs Mother Used to Sing" or "When Old Bill Bailey Plays the Ukalele," both sung by Nora Bayes. 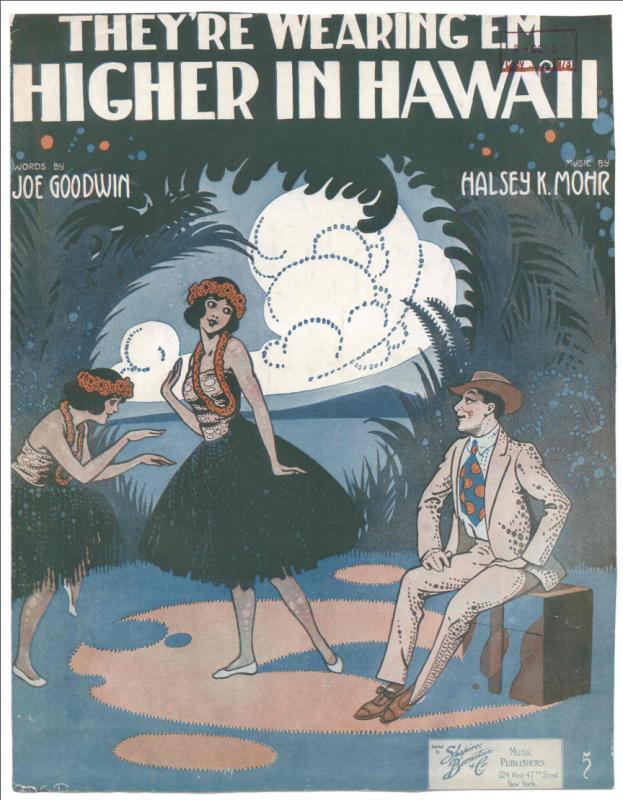 They’re Wearing Them Higher in Hawaii 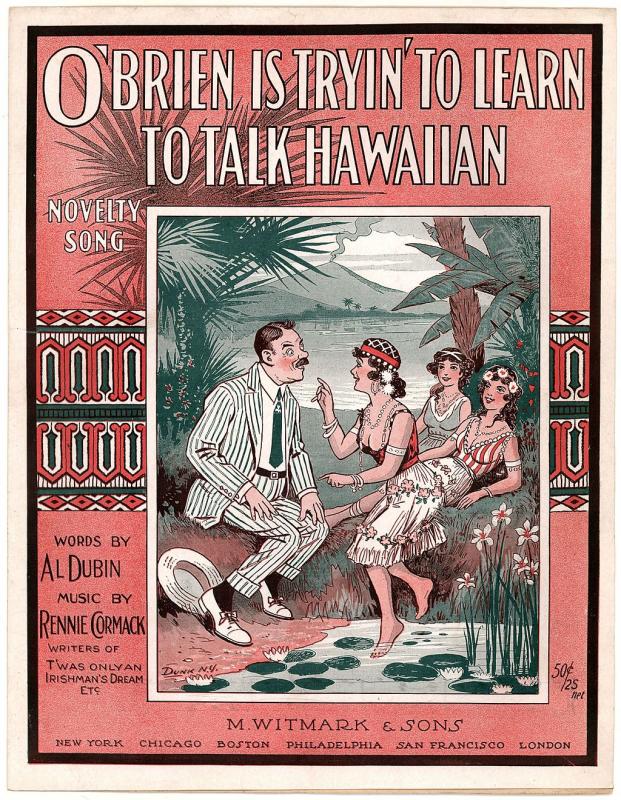 Hawaiian musicians also developed a distinctive style of playing the six string guitar, as you can hear in a Hawaiian native Frank Ferera's recording of "Kamehameha," in which the instrument was set face up on the players’ lap and a steel bar run along the strings to change pitch. You can see this technique in the photograph of Ferera to the left. With the right tuning, the player could articulate chords and melody in a unique style, referred to as “lap steel” or "Hawaiian” or “steel guitar” as opposed to the familiar “Spanish guitar.”

"Hawaii Ponoi," sometimes called the Hawaiian national anthem, includes both ukuleles and Hawaiian style lap steel guitar, along with lyrics in Hawaiian. It represents an example of the music Hawaiians developed for their own enjoyment and use.

Hawaiian musicians are well represented in early recordings, with songs by vocal groups and steel guitar players. Hawaiian songs aimed at the US market, like "Liaika Wai Mapuna," combined familiar melodic patterns with novel instrumentation and sounds. You can find Hawaiian musicians singing in Hawaiian and English, such as in "Kamehameha" sung by Ferera and his wife, Helen Louise. You can also find non-Hawaiians from the mainland singing songs that both celebrate and mock Hawaii and its culture, like "They're Wearing them Higher in Hawaii" and "O'Brien is Tryin' to Learn Hawaiian."

The Hawaiian steel guitar would go on the be extremely influential in both blues and country music. For example, W.C. Handy, in his autobiography, described how he was inspired to “invent” the blues at a rural train station in Mississippi. "A lean, loose-jointed Negro had commenced plunking a guitar beside me while I slept. His clothes were rags; his feet peeped out of his shoes. His face had on it some of the sadness of the ages. As he played, he pressed a knife on the strings of a guitar in a manner popularized by Hawaiian guitarists who used steel bars. The effect was unforgettable." Similarly, lap steel guitar would become central to American country music as well: bands playing in the “country” genre will almost invariably have a steel guitar of some sort. You can hear both blues and country infuences in "The Laughing Rag."

But in both blues and country music, what looks to us like the authentic sound of either African American folk culture or the folk culture of rural white people is partly a legacy of the American conquest of Hawaii.

In "Under a Texas Moon," recorded in 1930, The Frank Ferara trio manage to combine tango beats, Hawaiian guitar and themes from the American south west. The song came from a 1930 cowboy movie of the same name. Multiple people recorded it including "King Nawahi's Hawaiians" with English lyrics.

Starting in the 1930s, African American pentacostal churches in the South deceloped a style of music now referred to as "sacred Steel," In which Hawaiian steel guitars played sacred music. A clip from a 2020 documentary about the sacred steel tradition shows some of the music being played.

In that same decade, musicians playing "country" made heavy use of the steel guitar and its Hawaiian origins. In this clip a french musician demonstates country lap steel in the classic C6 tuning; hear the same tuning played by Don Helms in the Hank Williams country classic "Cold Cold Heart"