Q: What musical instrument was invented for use in early recordings?

A: The "Stroh" violin

With the advent of recorded music, audio engineers required adjustments to musical instruments to make them sound louder and clearer to meet the new needs of the technology. Given that amplifiers had not yet been integrated into mainstream music and audio recording, other mechanical strategies were needed to solve this problem. While brass musical instruments, like trumpets and trombones, were loud enough to be clearly recorded, other acoustic instruments like violins and guitars were too quiet to be picked up, due to the fact that the acoustical horn only captured only a narrow segment of the spectrum of audible sound. 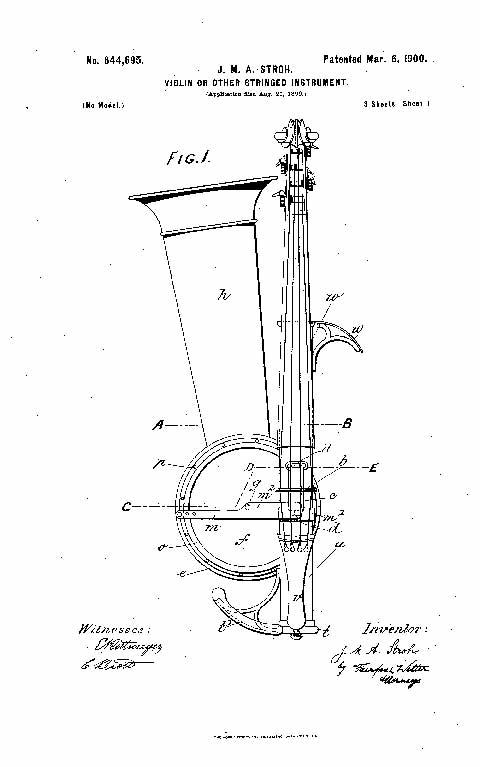 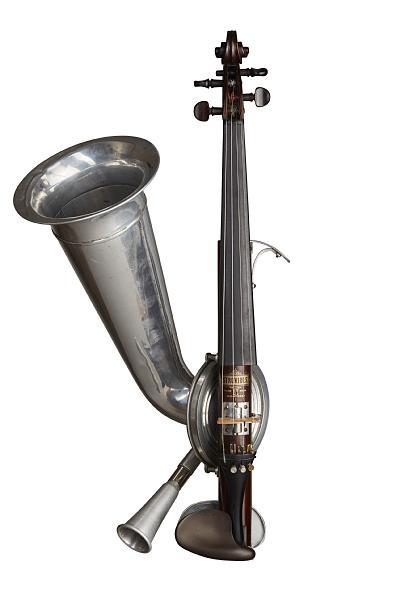 Made in England (before 1910), Museum of Arts and Crafts Hamburg

In 1900, German inventor John Matthias Stroh designed and patented a violin that had a large horn affixed to its side, perhaps inspired by the phonograph’s horn. Instead of the violin sounding in the traditional way, with acoustic reverberation in the instrument’s body, sound was made through a vibrating diaphragm and transmitted through the horn, thus mechanically amplifying the instrument’s sound. In later versions of the phonographic violin, a smaller horn was attached near the bottom of the instrument which allowed the player to hear what they were playing, not unlike a modern audio monitor used by electric guitarists. Many companies, including George Evans and Co., utilized Stroh’s patent, even adapting the horn to other bowed string instruments, like the viola, cello, and even the upright bass. Others installed the device on guitars and mandolins!

The “Stroh violin,” as it is colloquially known, was a success in early audio recordings beginning in 1904, and surprisingly did not sound metallic. The instrument was used in recordings from orchestras to jazz bands, and one or two Stroh violins could easily replace an entire violin section. If one were to listen to an orchestral recording before 1925, it would likely have Stroh-instrument sections, and musicians like Eugene Ysaye recorded with them during this time. New York Metropolitan Opera violinist Charles D'Almaine was the first musician to record with a Stroh violin, and he can be heard on his  recording of "Donkey and Driver" from 1904.  Furthermore, Argentinian violinist and bandleader Julio de Caro also played his Stroh violin during live tango performances. As recording technology improved, Stroh instruments were replaced with traditional violins once more.  Yet, in the 1970s, Romanian musicians revived the instrument in folk music, and still perform on these horned violins today.

In the early twentieth century, musicians, composers, and designers alike experimented with making instruments louder. In the 1920s, the Dopyera brothers patented their metal resonator guitar, commonly known as a “Dobro,” which used a metal resonating chamber to make the guitar louder. In the 1930s, the Aluminum Musical Instrument Company of Ann Arbor, Michigan  made metal string instruments out of a single sheet of aluminum. Later designers and instrument makers experimented and eventually employed electricity to amplify instruments for the stage and in recordings, from electric guitars to electric pianos with amplifiers which utilized vacuum tubes and electromagnetic pickups. These technologies are still in use today.

While the Stroh violin perhaps seems like a radical invention, there has always been a relationship between musical instruments and technology. Inventors, scientists, and engineers have played vital roles in the history of musical instrument making and innovation. Musical instruments often reflect the technologies of the time and are adapted for the musical needs therein.