Musicologists and historians believe that the banjo originated in West Africa, where it was sometimes called the banjar. Musicians made a banjar out of a large gourd, hollowed and halved with a leather skin stretched across it.  A neck attached to the gourd and strung gave a distinctive, percussive twang. When artists showed music on slave plantations, they frequently showed the enslaved people playing a banjo, as in this painting below, from the late 18th century.

The man seated second from the right is pictured playing a gourd banjo.

By the mid nineteenth century commercial banjos had appeared, typically using the frame of a drum to stretch the skin.

This example, from the Smithsonian’s National Museum of American history, has no frets, which was common in early banjos, and uses a wooden drum frame rather than a gourd as the body of the instrument.

By the 1850s banjos had come to be associated with minstrel shows, in which white people blackened their faces and pretended to be African American. Minstrel shows were the most popular form of musical entertainment in the US and banjos symbolized the minstrel show, as in this 1847 illustration featured below. It came as the cover of several pages of commercial sheet music arranged for piano and voices, which demonstrates the popularity of minstrel shows in private homes, not just on stage. 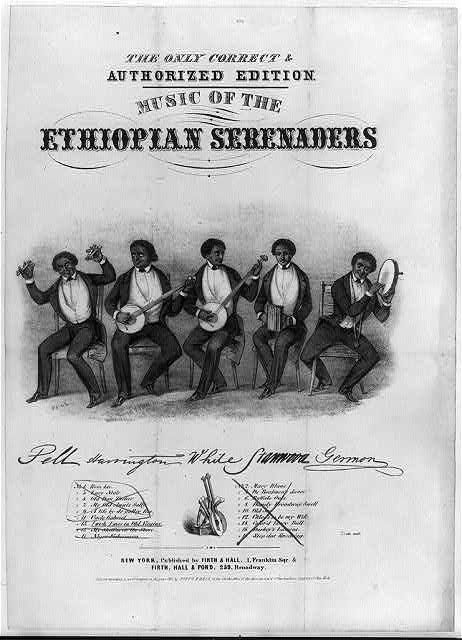 Music of the Ethiopian Serenaders

By the 1930s, African Americans had begun to abandon the banjo, and increasingly, banjos came to be seen as the instrument of white folk, bluegrass, and country performers as in this exhibit from the Kentucky Bluegrass museum in Owensboro, Kentucky.