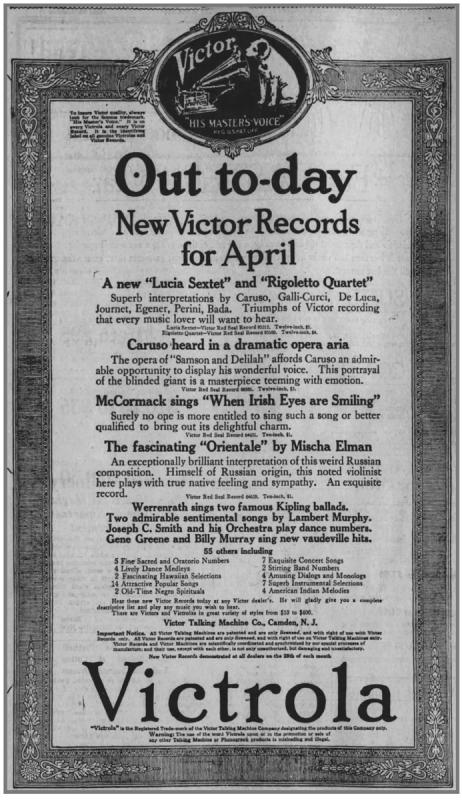 Recorded music was a new kind of product. No one knew exactly how recordings would be used, or how to sell them. Would people buy music or comedy routines, or political speeches? What kind of music? The public, as historian David Suisman has put it, had to be taught how to use the product.

The Victor Talking Machine Company settled on offering two product lines. They issued records of brass bands, vaudeville singers, and comedy acts, but for a slightly higher price they offered the “Red Seal” line, with a distinctive red label and an aura of sophistication.

Much more than today, consumers in the US and abroad accepted a division between “highbrow” and “lowbrow” culture. High culture included opera, ballet, fine art painting and sculpture, and the European formal orchestral and piano works now commonly called “classical” music. Low culture would include popular entertainments such as sports, most vaudeville acts, and ragtime. The distinction between high and low culture followed class lines, with high culture, perceived as the domain of the educated upper class, presented as timeless and superior. Victor’s Red Seal record line, priced slightly higher,  focused almost exclusively on European "classical" music.

"Vesti la Giubba (On With the Play)" from Leoncavallo's opera Pagliacci

Recording technology in the acoustic recording era didn’t reproduce a full orchestra very well, but it was very effective at capturing voices with relatively modest accompaniment. Victor's Red Seal line featured the wildly successful records of the first real recording star, Italian tenor Enrico Caruso. Caruso was said to have made the first record to sell over a million copies: his 1907 version of Vesti La Giubba ("on with the play"). 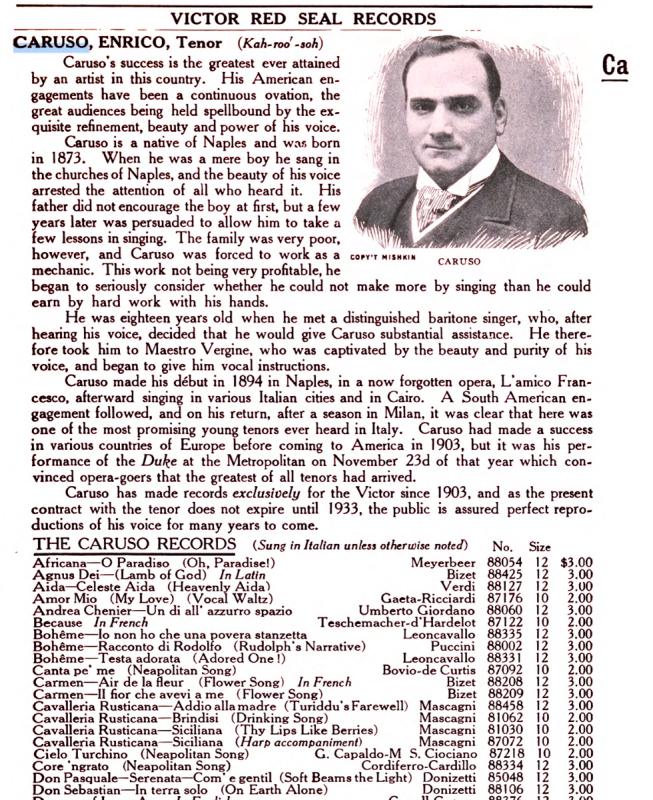 Caruso found recording strange: instead of singing before a crowd of people, interacting with them and reading their reactions, he sang into a metal funnel in a mostly empty room. But Caruso managed to find a way to express the force of his stage personality on record. His repertoire, focused on Italian opera, was also more accessible to ordinary listeners than other forms of opera then favored by “highbrow” audiences, and the technology limited him to pieces of music no longer than about four minutes. Listeners could thus hear a dynamic, concise set of “highlights" from longer operas, from a man who had learned how to “sell it” on record.  At right, you can hear his version of the well known Neapolitan song, "O Sole Mio."

Caruso sold records and performed throughout the world. His stardom helped the Red Seal label refine and position the genre of “classical music." It also helped create an international division in the global record business: classical music was recorded in the United States and Europe and sold all over the world, while musicians in Latin America and elsewhere were only recorded performing local genres aimed at satisfying local demand.